Recent technological advancements have completely blown apart and disrupted everything we knew about making high-quality commercials. Most commercials are shot on strict time schedules with strict budget allocations, which require all teams and tools to work seamlessly the day of the shoot to create the desired result. Marcus Domleo, DoP for the new John Lewis ad, “Summer of Sport”, Used AGITO to achieve exactly this, utilizing its versatility, speed and efficiency on set.

Directed by Daniel Skoglund and shot by cinematographer Marcus Domleo, The “Summer of Sport” adverts emphasis was on movement, athleticism and how an immersive experience can be offered by sport through modern televisions. The sequence of events featured a footballer and a long jumper. The first dribbling and kicking a ball directly at the camera, the second athlete performing a spectacular long jump into a sand pit. In both, all the images on the storyboard involved tight shots of sportspeople coming towards a camera at speed.

This was something that the team would struggle to capture using traditional cranes and dollies. As well as the financial implications of bringing a crane and separate dollies on to set for all the different elements, they were also unsure as to whether the crane would be able to get up to speed fast enough for the energetic, dynamic action. The speed of AGITO was appealing, not only could it keep up with the Athletes, its modularity meant it could be utilised quickly for the other shots too. Having considered other options it was agreed that AGITO was the only tool for the job.

comments Marcus “That is why, when we explored the option of bringing an AGITO on board, it proved to be the perfect solution. The AGITO offered the modularity, stability and speed we needed, whilst being a time-saving and cost-effective tool at the same time. It encompassed everything from athletic speed to classic tracking shots”

“Mcanulty was convinced that no other dolly would be able to keep the pace needed, which was what finally led us to bring the AGITO on board,” adds Domleo. 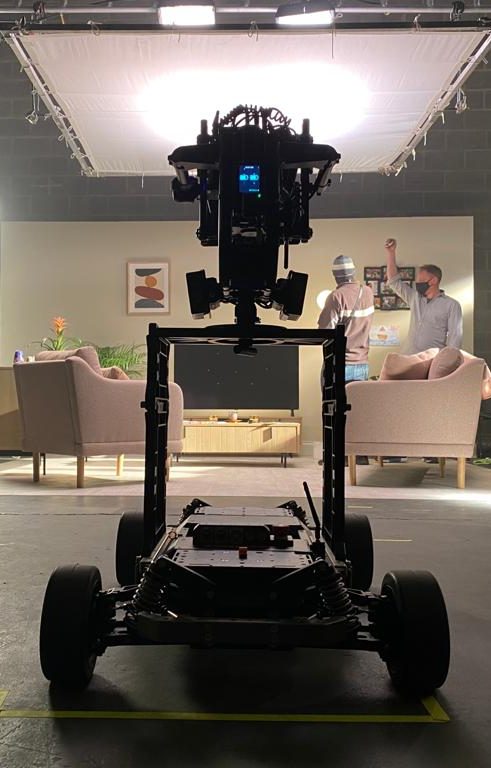 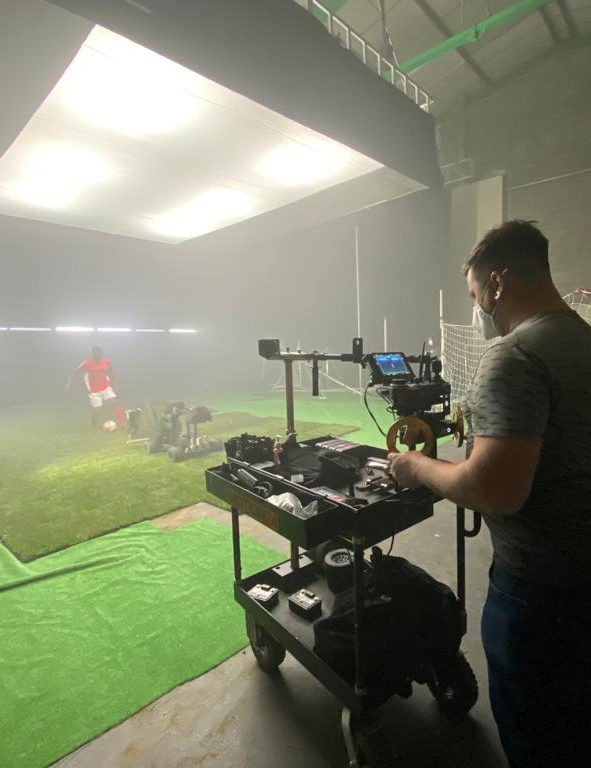 The AGITO also brought some unique capabilities to the shoot that a crane would have lacked. Its modular design meant that a Plexiglass shield could easily be built onto the AGITO, to protect it and the ARRI camera from the football, without hindering eithers performance. This allowed them to achieve the all important shot of a football coming straight at camera, at speed from the boot of the football player.

“You could actually boot a ball at it fairly hard,” says Domleo.

Meanwhile, AGITO’s ability to react swiftly and reach greater speeds than a crane meant that by using a specialized rig they could mount a camera directly in front of the long jumper. AGITO could then accelerate ahead at speed keeping pace and parallel with the jumper running hard, ultimately

keeping the camera in the thick of the action but ensuring it was kept out of the way of her landing area. AGITO had all the speed and stability in its pocket and more. 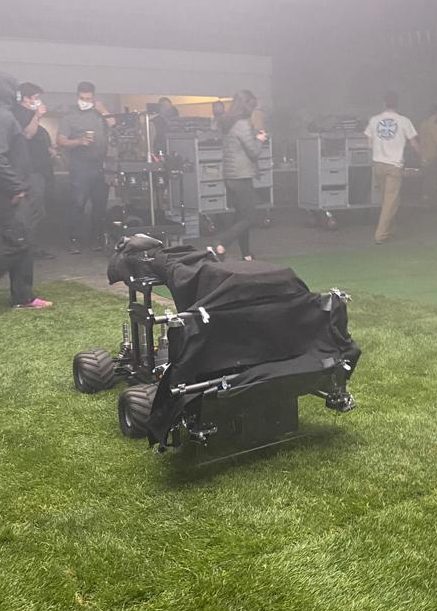 the TV. “Although I would have liked to have tested it on tracks, one of the holy grails for me is being able to perform a tracking shot, whilst not on tracks, but ultimately looking like it was done on track. You can achieve that with AGITO” remarks Domleo.

“I love engaging with new tools,” he concludes. “I believe they add versatility to the role of a cinematographer and, when you can’t afford to bring all the toys on set, a tool like the AGITO, that offers complete versatility in itself, is key. Executing different types of shots with one system efficiently leaves you to be creative and spontaneous. I loved working with the AGITO for this project and truly believe we could not have done this in any other way, the system offered the stability and modularity we required. It was a lot of fun and certainly didn’t disappoint!”

The advert was shot using an ARRI Alexa Mini mounted on AGITO using a Movi Pro Gimbal package. Control was shared between Domleo, working alongside David Crone as AGITO operator, James Davis as Movi operator, and Dave Mcanulty as Grip.